The Grundodrill method is used to construct and renovate water pipelines, pressure sewerage, and gas and communications pipelines. 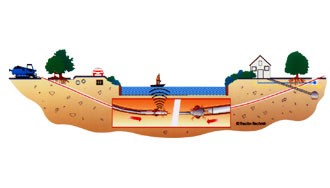 In most cases, the directional drilling operation is a two stage process. The first stage involves the drilling of a pilot hole using a drill head and drilling rods, from the departure point to the end point, along the centreline of the proposed pipeline. The second stage involves enlarging the initial hole to the desired diameter in order to accommodate a pipeline of the required diameter.

As the pilot hole is being drilled, bentonite drilling mud is pumped down the aperture in the centre of the drilling rods. Jets of bentonite mix penetrating through nozzles cut the soil and facilitate the removal of soil particles by washing them to the surface where they settle out in a reception pit. The direction of drilling is guided by turning the head down, up, right or left, as required.

The drilling of the pilot hole is monitored by a specially designed survey system. A sensor inside the drill head is transmitted by radio signal to the display of the survey system on the surface, where a computer and an operator interpret and note the information received.

An enlargement is always made approximately 30% bigger than the pipe pulled in. Accordingly, for example, an hole of 150 mm is made in the ground for a DN 110 pipe.

The pilot drill head is removed at the end point, after which reaming devices are attached in order to enlarge the hole to the required diameter. A rotating reaming device is attached to the drilling rods, which are pulled back toward the drill down the initial hole at the same time. Behind the reaming device, a new pipeline is connected in the desired manner and pulled in during the process. Bentonite pumped down the canal inside the drilling rods carries liquefied soil particles to the surface.

AS Terrat’s drilling team has completed thorough certified training by the manufacturer, Tracto-Technik GmbH, in Germany. 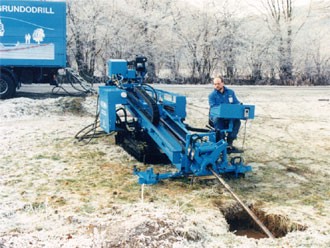 1. A pipe to be laid needs to have a smooth exterior surface to minimise friction/resistance when the pipeline is pulled in. For water and sewerage, PEH pipes are preferred.

2. Using the Grundodrill method, pipes measuring 3 inches (75 mm) to over 40 inches (1000 mm) may be laid. Furthermore, multiple pipes may be pulled through at the same time, but only if their diameters are small. The process is the same for laying either a single pipe or multiple pipes.

AS Terrat has Grundodrill 10S equipment capable of laying pipes 350 mm in diameter and 200 m in length, depending on the soil.

3. The length of the section drilled depends on the soil and drilling equipment used, ranging from 120 m to 1800 m.

4. Geological information about soils is needed for both designing and drilling to be carried out. Pulling and pressure need to be monitored carefully. Soil conditions are important when it comes to any drilling of this kind.

5. Directional drilling does not necessarily require access or reception pits. At the drilling site, there has to be enough room for the pipeline to be welded into one piece and aligned with the drilling line.

6. The directional drilling method is relatively complicated and thus requires an experienced operator. The operator has to know about drilling, the effects of drilling on various geological strata, reading and storing instrument data, interpreting information printed out from the computer etc.

7. The precision of laying depends on the measuring system used and the skills of the operator. That said, deviations have been over 1% of the total length in general.